For a non-profit community arts organization to survive for over 60 years seems worthy of celebration. Among Rochester’s community orchestras, the Penfield Symphony Orchestra has the longest history, having begun in 1955 as the Penfield Community Orchestra.

The organization was founded by a small group of dedicated musicians, at the suggestion of Robert Seidel and with the encouragement of Elmer Peck, former Penfield School District Superintendent and Principal, and Ruth Steese, former director of music for the Penfield Schools. Musicians Shirley Mehlenbacher, Dr. Edward Munson, and Robert Seidel were among the first members. 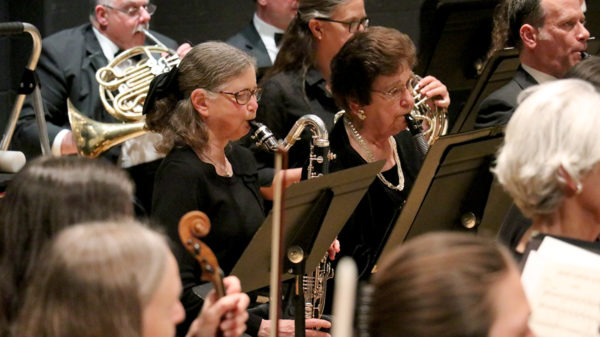 Originally, the orchestra was part of the Adult Education Department of the Penfield Central School District. By 1965 it was sponsored by the Penfield Recreation Commission, and later by the Town of Penfield. In 1982 the orchestra members voted to reorganize as an independent, non-profit organization.

At least 30 conductors have led the PSO, some for a single concert or for one season, others for up to 5 or 6 years. Beginning his 20th consecutive season on the podium, David Harman has had the longest tenure as Music Director. Under his leadership the orchestra has numbered at least 70 players, growing in recent years to over 90 members.

From the earliest years, PSO concerts have been enriched by talented soloists and groups. These include members of the Rochester Philharmonic Orchestra, winners of the Jo Amish Young Artist Competition, and school and community choirs. Suzuki string players from the Penfield schools have performed on some holiday concerts. And for many years the PSO presented an annual, free Picnic Pops concert, sponsored by the Town of Penfield.

As the PSO’s 50th Anniversary history booklet states, “Thanks to the dedication and hard work of the entire PSO family (audience, musicians, volunteers, office staff, board members and financial supporters) we are on very solid ground, both musically and financially….” That is still true today. With your continued support it will be true for many more years.